Vintage maps, used as decoration, can be very attractive in any interior. They become a focal point in any room. The oldest ones are the most interesting as the names of the countries and some borders may have changed since then! They are very rare, often unique so by the way really valuable in any collection.

Most of the time people put them in a bedroom, but you can also fit them in any living room, dining room or hallway.

Be inspired by our picks and let me know which one is your favorite?

This one is a school map about Europe from Bacon’s Standard. The 2 sticks on the top and bottom make it goes straight and stay finally in good condition. The size is probably not so big but disposed on the top of a vintage suitcase it definitely gives a true vintage feeling. 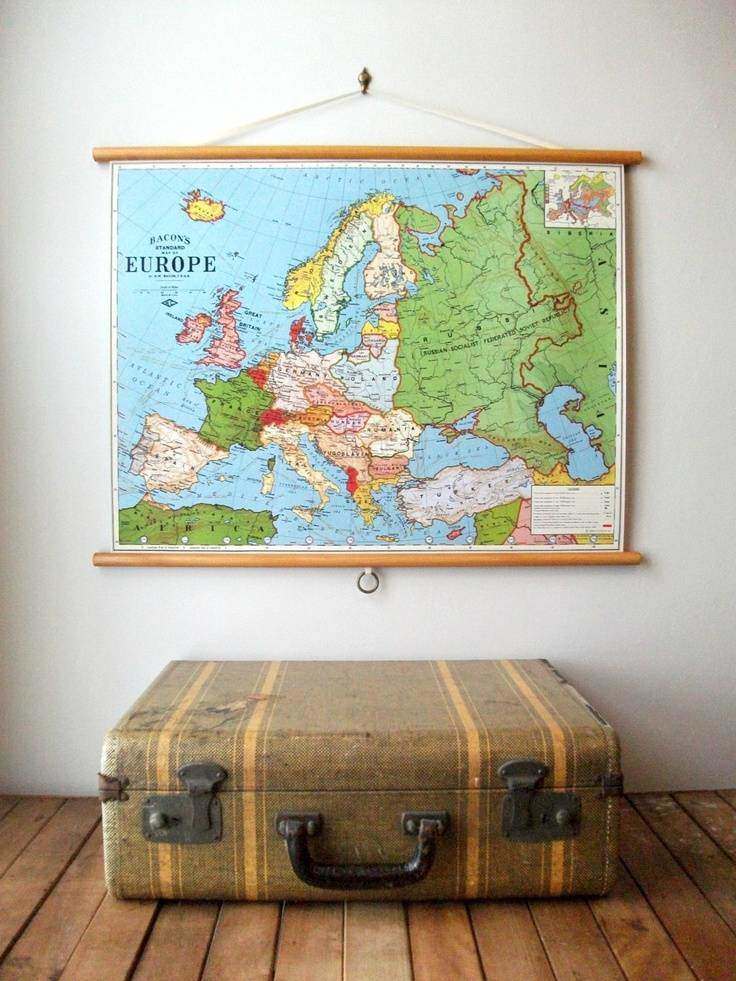 END_OF_DOCUMENT_TOKEN_TO_BE_REPLACED

History of the French Club Chair:

The first French Club Chairs appeared at the beginning of the 20th century. They were characterized by their straight lines, from the Art Deco Style opposed to the Art Nouveau Style with its clean and flexible lines.  After the Second World War, dozens of shapes appeared.

Some have stood the test of time, such as the “Moustache”, with a lip like curves across the back and the “Gendarme’s Hat“, with an elegant arch like curve, both appeared in the 40’s. My favourite one is the Round Shape, which was the most famous and had become the Club Chair’s most emblematic incarnation. 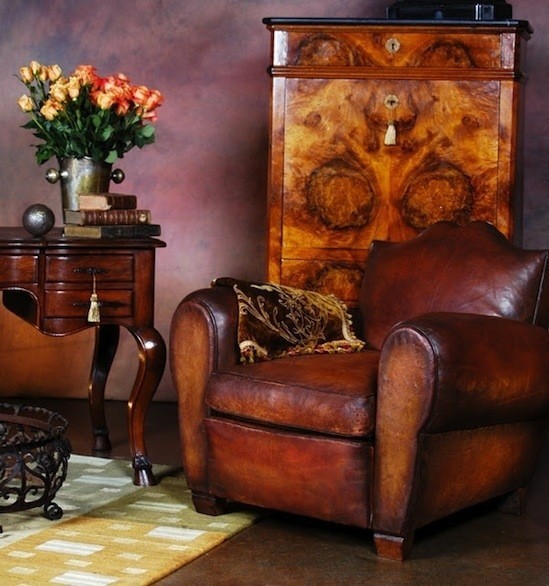 Contrary to popular belief, this leather Club Chair is French origin.  At first, the Club Chair was called “The Comfortable Chair” to distinguish it from the “Fauteuil de style” which had straighter lines and was less enveloping. While the name “Club Chair” refers to the Gentlemen’s Clubs in the 19th Century in England where gentlemen could escape from their home (and wives) and enjoy cigars, brandy, and conversation about business, politics and sports. The names of the fashionable London streets full of such Clubs are still used to name classics English Club Chairs such as St. James or Piccadilly.

Years later, The Club Sofa appeared, offering more seating space, but also an opportunity to have a comfortable bed. You can find the same shapes as the Club Chairs, like the “Moustache”.

This vintage chair has become the most coveted chair in the world and had inspired many designers, from Le Corbusier, Pierre Jeanneret, Charlotte Perriand to Philippe Starck in the 80’s 90’s with the creation of the Bubble Club. It was made of polyethylene moulding, taking the Club Chair from the bourgeois home to the terraces and gardens. So over time, nothing changes fundamentally, everything deforms and is transformed, and the club doesn’t stop instilling new ideas, by these contemporary forms since its origin. Its longevity, modernism and refinement are still very much admired today.

How the French Club Chair is made?

END_OF_DOCUMENT_TOKEN_TO_BE_REPLACED

Are you looking for the perfect Industrial Lamp?

Industrial lighting is really trendy and will give the perfect final touch to your decoration project. If you struggle to find the right one for your interior, have a look and be inspired by my Top 10 Favourite Industrial Lights.

Of course I love it, maybe because I’m French and she is too, but also because I love the way you can personalize it as much as you want. You can have 1, 2, 3 until 6 arms, you can choose their colours, and you can put it everywhere in your home, it will fit perfectly! Besides the design is really perfect, even if it was built for industries. The lampshade with its circular ring is great once it is on, you can orientate the light as much as you want and you won’t be burn! Not a surprise to be a French iconic light! 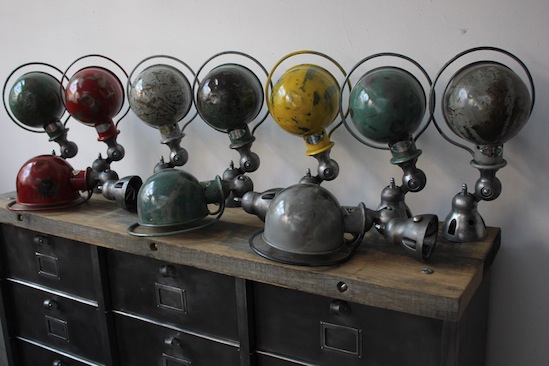 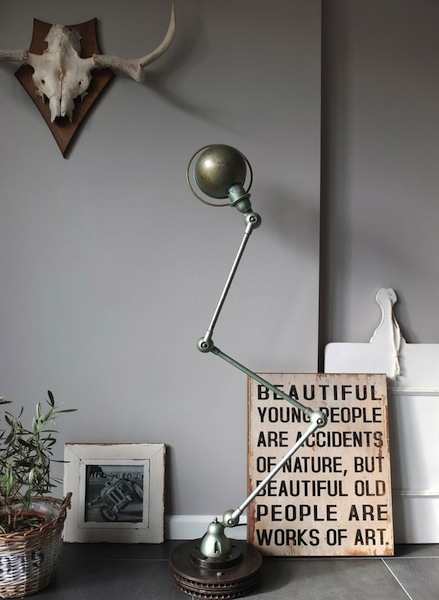 END_OF_DOCUMENT_TOKEN_TO_BE_REPLACED

Are you looking for the perfect Vintage Industrial Light?

My favorite one, beyond any doubt, is the Jielde lamp.

Let me tell you why!

Lightning is essential to create mood and ambience in every room. The Jieldé is the solution to add an instant industrial style update, a touch of urban-chic to your home.

What a wonderful industrial lamp, unique in the world, designed with the ability to twist and turn at the joints without conflict to the wiring, that we can settle and unsettle by ourselves, grow longer, grow shorter, which articulates in all direction, which laughs at vibration, which can revolve indefinitely and absolutely waterproof. It is “indestructible” and is made to last a lifetime. It is not only beautiful, it is highly practical. You can choose it wall mounted, table lamp, floor lamp, pendant light, single or double. With the Jieldé, you can light every room in your home. 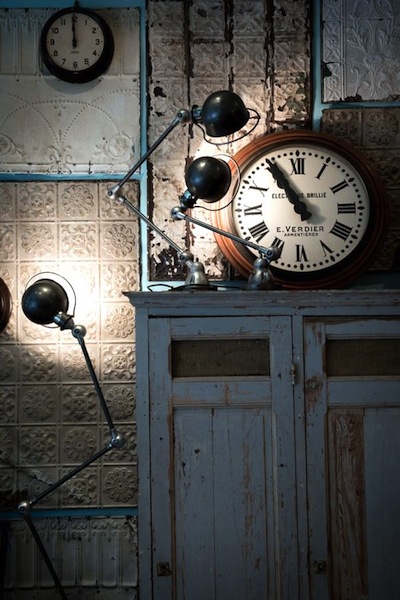 END_OF_DOCUMENT_TOKEN_TO_BE_REPLACED

We are very happy to informed you that La Boutique Vintage has open its new website.

Nowadays, the new media is helping us contacting our family and friends to wish them a Merry Christmas and a Happy New Year within seconds. But how impersonal is that! Sending a text to 50 people at the same time!

If you’re just like me a postcards lover, you’re always happy to receive something by the mail. Would you have the idea to print your email or text and hung it in your kitchen?

The Festive Season bring us once in a year, into the mood of making the others very happy, to wish them all the very best for the next new year and to remind them how much we love them. For me, the best way to do it, is definitely to write a few words on a beautiful postcard and give it or send it to our beloved ones.

Have a Merry Christmas and a Happy New Year to all of you and hope you will enjoy those stunning postcards that remind us some happy childhood moments. 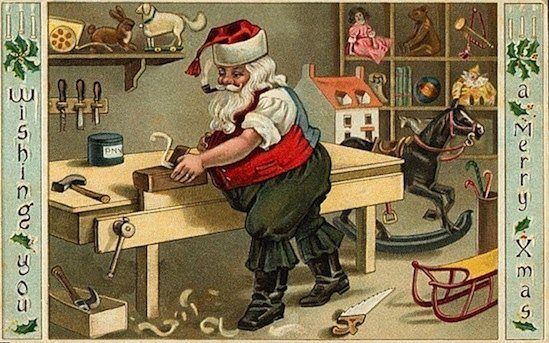 The Christmas Market is a place where you can find everything in connection with Christmas. Most of time it is brand new handmade items or you can also find some vintage ones.

The first tracks of Christmas markets go back to the XIVth century in Germany, under the name of « Saint Nicholas’ Market». The first document telling a Christmas market is dated from 1434 under Frédéric II de Saxe’s reign, evoking one « Striezelmarkt » (protestant reform), which took place at Dresde the Monday before Christmas. Later, the reformation immortalized the tradition by renaming it “Christkindlmarkt” (the Child Christ’ market) to fight against cult of the saints. The Christmas market of Strasbourg dates from 1570, and the one of Nuremberg from1628. 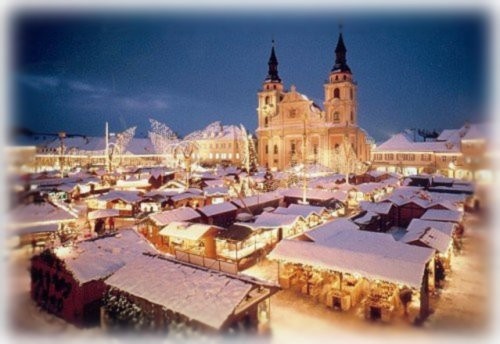 An important revival, considered as commercial, took place in the middle of 1990s. Numerous cities in Europe established their own Christmas market with chalets and sometimes attractions (short-lived ice rink, big wheel).

END_OF_DOCUMENT_TOKEN_TO_BE_REPLACED

Why do we have a Nativity Scene?

According to the Gospel, based on the account of Saint Luc, Jesus was born in a cowshed, more exactly in a manger.  It exists two older representations of the Gospel which are known, date of the 4th century. The first one consists of a mural painting with a death chamber of a Christian family lived, around 380, which was discovered in the Saint Sebastian catacombs, in Rome. The other representation makes reference to a scene painted on a sarcophagus of the Saint Maximin basilica, representing the worship of the baby Jesus by the Three Wise Men. 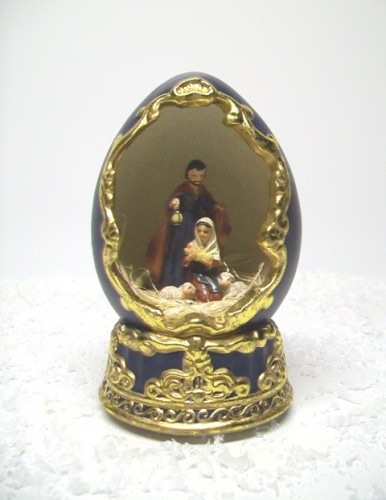 From the 4th Century, the Christmas Celebration is celebrated: In the Holy church Mary of the Incarnation of Jesus, today “Sainte Marie Majeure” in Rome. We know that a celebration of Christmas is commemorated during the night of December 25th since the 4th century. Indeed, the date of December 25th was fixed as date of divine child’s birth in the 4th century. The debates, which brought this decision, allowed developing a religious practice around this event. From the 4th Century, the former papers report that the celebration of the Christmas Eve took place in Sainte Marie of Rome around the nativity scene.

END_OF_DOCUMENT_TOKEN_TO_BE_REPLACED

Creating a beautiful first impression. Wow your guests with some Vintage Christmas porch decorations. Glam up your front door with some Vintage ice-skating and lantern decoration. Vintage wooden sledge, wooden skis or snowshoes will ensure that your front door stands out from your neighbours. You can add some Christmas tree branches and cone pines, some lovely red or natural ribbon, all will cheer up your porch or garden.

My favorite Christmas outdoor decoration is the mail box! 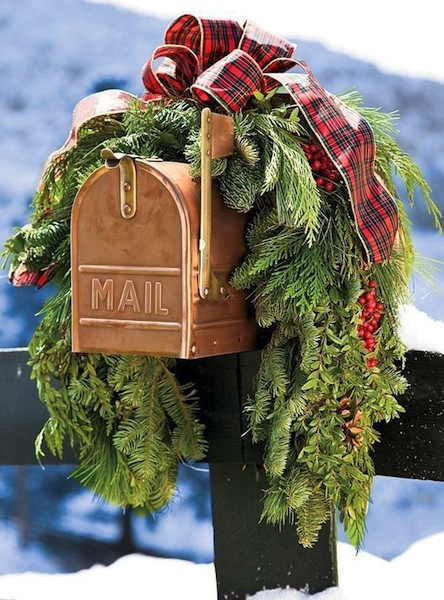 END_OF_DOCUMENT_TOKEN_TO_BE_REPLACED

The Christmas season is really on. Now that we have the Christmas Tree and the table decoration, let’s give our presents some Vintage feelings.

We all love presents and for me, it is really important to offer something that look nice, whatever is inside, the gift itself has to be beautiful, what a great pleasure when your family and friends will say wouahhh this gift is stunning! It is so great to make people happy, so this is the time to make some effort and be creative again!

I love this old Vintage tin used as a gift box, with just a lovely ribbon and baubles, so simple, just beautiful! 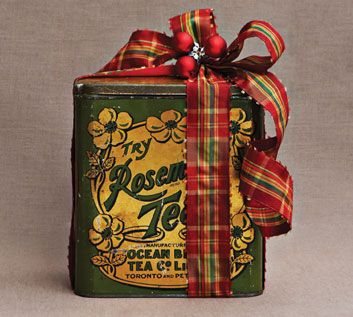 If you know very well the person, maybe you can more personalized the present you’re going to offer her. Let’s take an example with someone who loves the mountains, why not trying to find a Vintage postcard or picture about mountains and just add it on the top of your present. What a fantastic unusual gift! You have a Comics lover, buy on ebay a Vintage Comics, copy it and wrap his present with it!